The rapid advancing field of electronics has resulted in communication systems providing many diversified and sophisticated functions. This has come at the cost of increased sensitivity to static. Lightning and its influence have been one of the greatest contributors to system failure. We offer a full line of lightning protection services ranging from field studies to sales and installation. All equipment is UL listed.

The weakest link in the lighting suppression chain is the ground. The National Electrical Code specifies a maximum ground resistance of 25 ohms. In industrial and commercial installations the goal is 1 to 5 ohms resistance. Properly sized ground wire should be routed between the lightning suppressor and the grounding system. 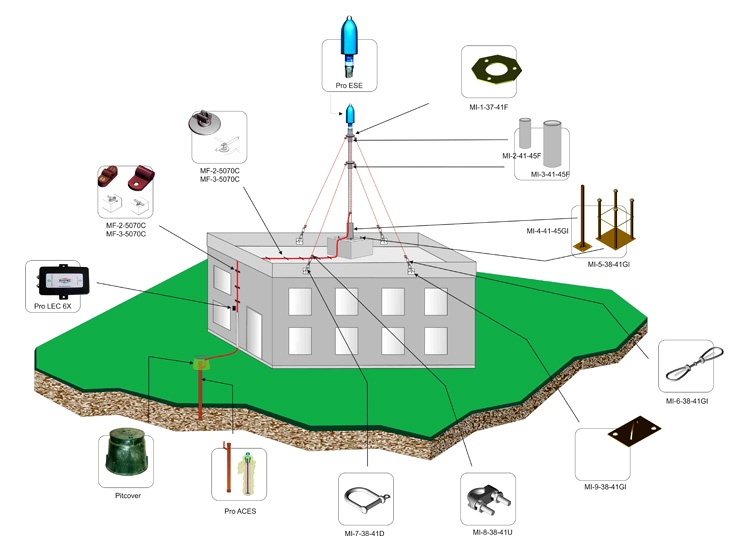 The ionizer is a unique device in that not only operates in the typical collection mode but can offer dissipation as well. The dissipation mode offers protection against lightning. It operates on the basis that when a thunderstorm moves into an area, it induces a charge on the surface and on any structures below the weather cell. In other words, lightning starts from the ground up. By slowly dissipating these charges to "points of discharge", we create an environment within a weather cell with an extremely reduced strike potential. We urge our customers to protect their systems before costly disaster occurs.

All too often we are contacted after lightning has struck a system. For instance a critical microwave system carrying data to support automated machinery suffered a lightning strike. The resulting damage severely impaired the operation of the manufacturer, its workers and their ability to deliver products.

Our findings showed that the land was filled in, and had poor soil conductivity. Several other weaknesses were found. Our lightning protection recommendations included upgrading the ground system, increased suppression on the power and data lines, as well as installation of a tower mounted ionizer originally developed for use by NASA. Since we installed the system, some twenty six (26) years ago, there have been no strikes where as previously there had been three (3) lightning strikes over a five (5) year period.